For history freaks and culture vultures, there is plenty to see, especially if you fancy older medieval history. Almost every village has a church in Romanesque style, quite often almost 1000 years old. The “kick-off meeting” of the Crusades took place in Clermont-Ferrand, the capital of the Auvergne, in 1095 and was chaired by the then Pope, Urban II. Castles from roughly that period can often be found and, although not proven, it is not impossible that Tautal-Bas was also founded around that time. The chateaux in the area are not luxury homes for a spoilt nobility, but often still resemble medieval, defendable fortresses, providing security to the population in dangerous times. They sit on strategic locations, seemingly hewn in stone directly from the mountainside, with sweeping fairy-tale views.

Several "Commanderies" of the Knights Templar can be found in the area - for example in Ydes, 20 minutes away from Tautal-Bas, and in Celles, near Murat. Both the main famous, or infamous, religious orders founded during the Crusades, the Templars and the rather longer lived Hospitallers, had specific "sections" from the Auvergne: those knights speaking the same language used to stick together, and hence these sections were called "Langues". The "Langue d'Auvergne" in both the Templars and the Hospitallers were among 8 original such Langues, producing many Grand Masters for the entire Orders over the centuries. Other original Langues included the Langues of Italy, England, Castilia, France, the Provence, Germany and Aragon. Why do France, the Provence and the Auvergne appear here as separate countries, even though they are all in France today? Because at the time in the Middle Ages these areas were not a country like today: they had different languages (for example the Langue d'Oc, known as Occitan or Patois in the South, and the Langue d'Oeil, the French we know today, in Northern France), different Kings and traditions - but also a common ancestry: Roman Gallia in antiquity, and the Carolingian Empire in the 8th and 9th century. If you think this is all the distant past consider the following: Occitan is still spoken by about 1.5mn people in Southern France, Northern Italy and Catalonia, where it is an official language. Some of the people in the villages are only the first generation to fully grow up with French.

During the Roman period, the „real“ Asterix village (from the comic books made famous by Uderzo & Goscinny) should not have been in Brittany, but should really have been in the Auvergne: the local hero Vercingetorix, leader of the tribe of the Arverni, after which the Auvergne was named, was the last warlord to resist Caesar. In the end the Roman emperor conquered all of Gallia, roughly what we call France today, but his legionnaires had a specifically hard time to subdue the people in this region, as elaborately documented in Caesar's memoirs. In Gergovia, just outside Clermont-Ferrand, Caesar and his army were in fact defeated by the Arverni under Vercingetorix. Only at the famous Battle of Alesia (which is in Burgundy), Caesar finally defeated a confederation of what remained of the Gallic tribes - again led by Vercingetorix, and the great warrior was finally captured, deported to Rome, showcased to the Romans in a march of triumph through the city and subsequently executed by strangulation – a high honour in his day...

(Below: interior of the 12th century church of Menet, the village visible from the hilltop at Tautal-Bas. The ensemble is called "Musica Poetica",  rehearsing for a concert which took place on 21st July 2016. Musica Poetica play baroque and renaissance music on original instruments from the 16/17th century and they were guests at Tautal-Bas at the time. See http://en.wikipedia.org/wiki/Menet and http://fr.wikipedia.org/wiki/%C3%89glise_Saint-Pierre_de_Menet . For a general list of historic monuments in the Cantal, please see  http://fr.wikipedia.org/wiki/Liste_des_monuments_historiques_du_Cantal ).

ABOUT THE AUVERGNE, THE CANTAL, HOLY COWS, AND ALL THAT 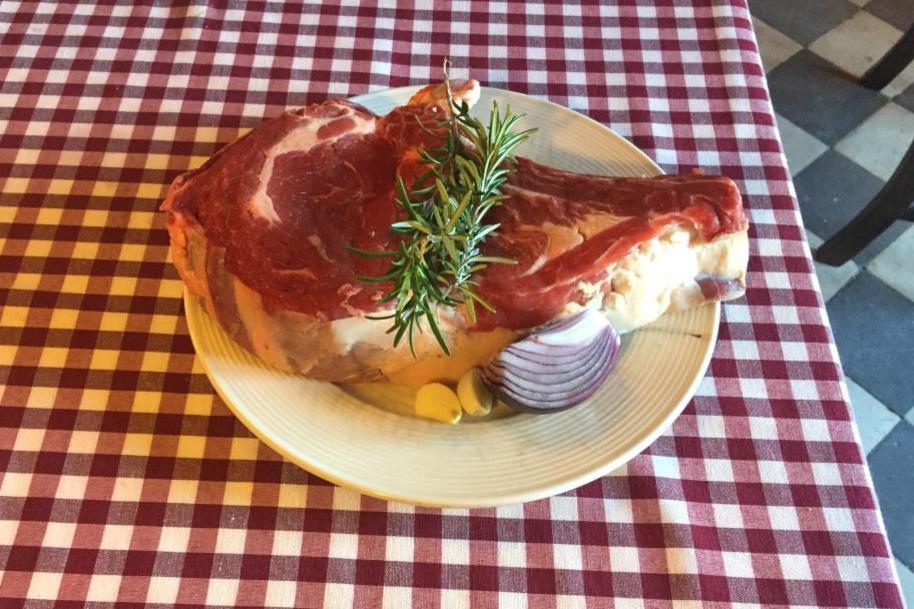 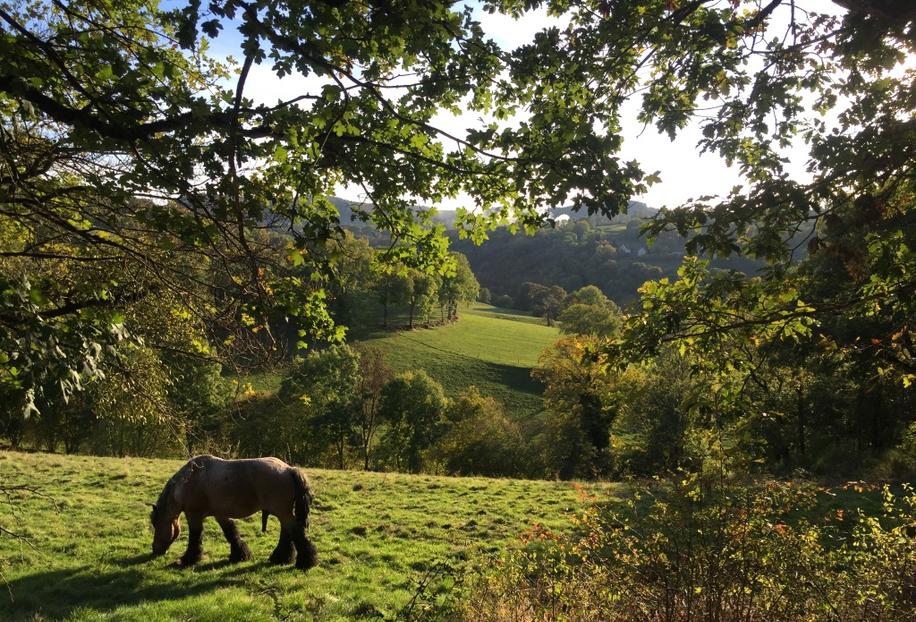 (Picture left: "rouelle de porc", or a steak of a leg of porc, with 2 bones in it. The meat is about 2 and a half inches thick. Not per se typical of the area, but locally available in high quality, tasty and a lot less expensive than beef. The picture was taken immediately after taking the steak out of the wood fired oven. Seasoning: rosemary (from the garden) and a bit of garlic. Before going into the oven the piece was pan fried in a bare steel pan for about 5 minutes on each side, in very hot clarified butter and olive oil. Note the layer of fat all around the outside, about as thick as your little finger and held together by the crusted skin. A feast!) 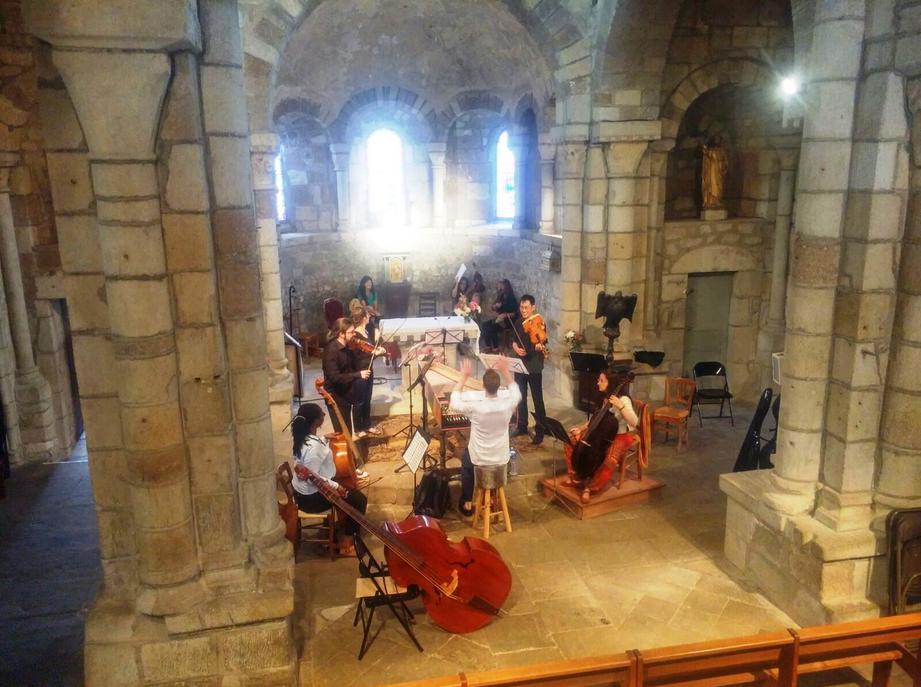 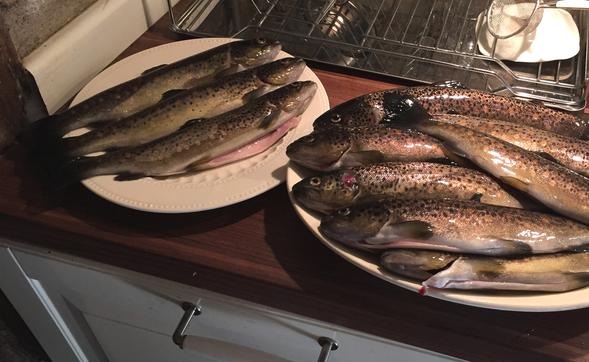 (Picture below: local, very fresh "Fario" trout, which can be bought while still alive if you want, on the market in Riom-es-Montagnes on the 2nd and 4th Wednesday of each month. Trout could simply be grilled whole, or it could be prepared in tinfoil on the BBQ, with herbs of your choice or Bleu d'Auvergne cheese on the insides. It is a fatty fish of the salmon family, with a high Omega-3 content, typically found in cool, fast running streams.) 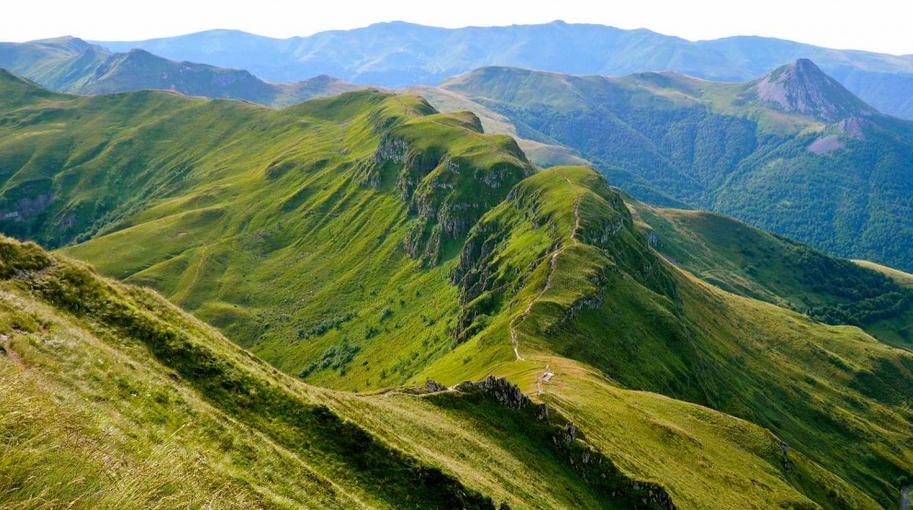 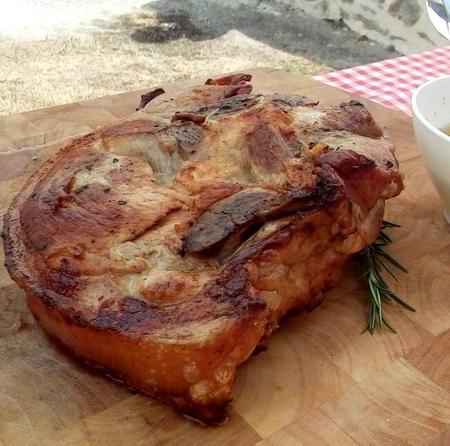 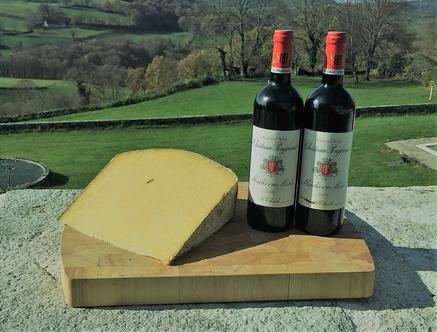 (Picture below: Puy de Sancy in winter as backdrop to Chateau de Tautal-Bas which can be seen in the bottom centre section of the picture. The picture was taken in a North Easterly direction, about 3.5km from the chateau as the crow flies but about 40km from the white mountain. At 1,886m, the Puy de Sancy is the highest peak in Central France (for skiing this mountain, see: http://www.sancy.com). The chateau itself is located at 850m altitude, and the photographer stood at approximately 1,000m. The picture was taken on 28 December 2014.)

In the Cantal, the hills and forests are green and lush, the vistas spectacular, the castles numerous and the history very much alive. The locals are generally relaxed and sympathetic, and they love rugby more than soccer. They usually distrust the French of the big city and tend to go their own way. (Picture: the Puy Mary which reaches an altitude of 1,783m, seen from the view of a hiker.)

(Picture left: the wine is from the Bordeaux region (Chateau Poujeau, Moulis en Médoc, 2005, to be exact), but the large cheese is a semi-aged "entre-deux" Cantal fermier, made about 1km from Tautal-Bas on a farm in the neighbouring hamlet "Le Féval", in rounds of over 30kg each. Visitors can buy it by simply driving (3 mins) or walking (15mins), up to the farm and asking. According to many people, both these delicacies, the wine and the cheese, are best enjoyed at old-fashioned room temperature: not the 21 degrees we enjoy today but the 16 or 17 degrees you would find in the old days in a thick-walled stone farm house or chateau, heated only by wood fires. The cheese gains taste noticeably if it is enjoyed at a similar temperature, and not straight from the fridge. )

(Below: cattle market in Riom-es-Montagnes, 5km from Tautal-Bas, in late summer 2014. Picture courtesy E. Verkerk, a guest at Tautal-Bas.
The cattle are of the ancient Cantal race, famous for top quality beef and also for cheese production.)

The Auvergne in general and the Cantal in particular are part of authentic rural France. It is a region where mass tourism has not, or not yet, polished off the ancient, pastoral culture. The land and people are relatively untouched, and typically understated. The important things still are the way they were meant to be. Perhaps because of this, the region was listed as the 6th most recommended place to visit worldwide in 2016 by Lonely Planet.

The Cantal, the department within the Auvergne where Tautal-Bas is located, is situated in Southern-central France, at a bit more than a 3 hour drive to the Mediterranean coast and the same distance to the Atlantic coast, and 4.5 hours' drive south of Paris. Owing in part to the elevation of between 500 and 1,800 metres / 1,600 – 6,000ft, it has 4 distinct seasons and it is an area especially well-suited to outdoor pursuits: walking, rock climbing, angling, wildlife watching, medieval-town-discovering, star gazing and of course all-night alfresco dining and barbecuing. After summer you can admire the turning leaves, or go shooting, hunting and stalking boar and deer. When winter comes, all forms of snow sports are on offer in the area: Tautal-Bas is located equidistant at approx. 45 mins drive from the 2 most elevated skiing areas of the Massif-Central, ie "Le Lioran" www.lelioran.com, around the Puy Mary and Plomb du Cantal (peak 1,855m), and "Superbesse"/"Le Mont-Dore" http://en.france-montagnes.com/resort/besse-super-besse, around the Puy de Sancy (peak 1,886m), offering a total of 140+km of ski slopes.

Indoors, the visitor generally awaits a warm welcome with a cold beer or some good wine (some of it grown in the Auvergne, and matured at altitudes of up to 1,200m). One finds as yet unpretentious cafés and small restaurants in the villages and towns. Lovers of history and culture can eat their heart out by reading about and visiting the many historic buildings, most of which date back centuries. Food lovers will find an earthy, honest cuisine, with its roots in the hills, fields and forests.

The Cantal is one of the quietest, most spacious areas in France. There is no traffic and always enough space to escape the business of modern life, also in peak season. In summer, hot and sunny days are usually interspersed with cooler and more humid ones. The evenings are often very pleasant and refreshing, and there are not many mosquitos. When the skies are clear, you have sheer unlimited views from the hilltops, such as the one in Tautal-Bas. At night you will spot billions of stars in the sky, owing to the fact there is no light pollution from nearby cities. The air, and the water, which is locally sourced, are of an exceptional quality, which positively influences all taste sensations. (Below: rich meadows surrounding Tautal-Bas + glimpse of view. The horses belong to a local friend and are regular first prize winners at the Ardennais breeding competitions).

Gastronomically, the focus is on quality and honesty, and less on complex recipes. This is of course influenced by the local semi-mountainous climate. Proper gourmands can eat their heart out: the local cuisine is honest, with the earthy flavours of grass fed meat and cheese prevalent, but also fish: trout, for example, and French native crayfish. The quality of the escargots is remarkable and they are certainly a match for the ones from Burgundy – during the season you can find them in abundance pretty much everywhere. The east of the Auvergne, ca 70km away, has an Appellation d’Origine Protégée for wine, Cote d'Auvergne, and the area has a history of wine making going back to Roman times. The local beef, from the furry Cantal cows with the distinctive horns and long legs, somewhat reminiscent of the Scottish Highlanders, is well known throughout France - it is right up there among the best. The race of cattle is among the oldest known to man, bred locally for thousands of years, and more recently in demand by farmers all over the world, because of its hardiness, resilience and good yield. The rustic cheeses, massive in size, with a crust an inch deep and creamy inside, are among the most typical and most prized in France, although as yet less well known to the outside world.

Hard-Core Gastronauts please note that several of the top 1,000 restaurants in the world according to the influential and objective "La Liste", http://www.laliste.com/ are within a radius of 200km from Tautal-Bas, with the closest one of these 5 at about 90km: http://www.sergevieira.com/. Of course you can also go to the village restaurant in Valette, "l'Amandine", which is very good, if more down to earth, only 5 minutes away, and very reasonably priced: http://www.restaurant-lamandine-valette15.fr/fr/restaurant-lamandine.

(Below: local beef "cote de boeuf" photographed fresh in the kitchen of the Chateau, on top of a full sized dinner plate. Some of the herbs can be freshly picked from the estate. Guests are free in principle to BBQ - with due care - in the wild, except in very dry periods. Always discuss first.)